Making your own DIY paintball gear isn’t easy or cheap, yet many players do it just for the love.

Making your own paintball gun is not a good idea. In fact, we’re going to go ahead and tell you now that you should never do this. If you want to play paintball for cheap, it would be a much better idea to just book onto our website.

Still here? Okay, well I guess there’s no stopping you. Here’s our “do not follow in any circumstances” guide to making your own paintball marker, grenade and field.

How does a paintball gun work?

So you’ve ignored common sense and decided to build a paintball gun? Before we start building one, we need to understand how a paintball gun actually works in the first place.

A paintball marker consists of several different parts. Everyone is probably already familiar with the barrel of a paintball gun, known to professionals as the ‘shooty end’. When you pull the trigger, the hope is that a paintball will fire out of the shooty end. Never point the shooty end of your paintball gun at living things unless they are wearing protective gear.

How to make a paintball gun?

Paintballs are fired out of the barrel by the force of a burst of gas. While the mechanics of an actual paintball gun are more complex than that, we’re focusing just on building a very basic model. To make your own simple paintball gun, you need these four components: a barrel, a trigger, a burst of gas and a paintball.

Making the barrel is the simple part. You need a length of rigid pipe, PVC is probably your best bet. It’s important to match the diameter of the pipe to the size of the paintball. A standard paintball is 0.68 calibre, meaning that the standard paintball is 0.68 inches in diameter. You want to find a PVC pipe which is ever-so-slightly larger than 0.68 inches in diameter. Too small and the paintball won’t fire. Too big and the burst of air will flow around the paintball, making it unpredictable and inaccurate.

Next, we’ll need a PVC valve. This will act as our ‘trigger’ enabling us to choose when the burst of air travels from our bottle to our PVC pipe barrel. Secure a valve to one end of the PVC pipe using electrical tape so that it is airtight. The other end of the valve should be connected to the drinking hole of an empty plastic bottle, again using electrical tape.

Your DIY paintball gun is now complete! When you pump your hand pump, air will travel into the plastic bottle, but the valve will prevent it from escaping into the barrel. To fire your paintball gun, just pump your bottle, place a paintball into your PVC pipe, make sure that the “shooty end” is pointing away from anything or anyone that you don’t want to break, then open the valve to fire. We recommend not over pumping your bottle, especially on the first couple of shots.

What are detents in paintball?

One of the drawbacks of this kind of DIY paintball gun is that the paintball will simply roll out of the barrel unless you are pointing it upwards. This is known as a rollout, and it’s not just frustrating, it’s actually pretty embarrassing.

This is where ‘detents’ come in. Detents prevent paintballs from rolling out of the gun until the trigger is pulled. Most detents are very simple… just an elastic piece of plastic which holds a paintball in place but moves out the way when the paintball is fired. You can buy paintball detents cheaply online, or build them yourself if you are a creative type.

How does a paintball minigun work?

Some criminal masterminds in training have designed their own paintball minigun, but it takes some serious commitment and engineering ability to do so. 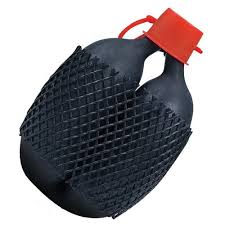 How do paintball grenades work?

Something which might be more achievable (though perhaps just as dangerous) is building your own paintball grenade, or paint grenade. Paint grenades come in two types: explosive and splatter. Explosive paint grenades actually use a little gunpowder to explode the paint in all directions… they are not widely used because of the obvious dangers involved in throwing explosives at people!

The splatter type paintball is a safer alternative. Once the pin is pulled and the paintball grenade is thrown, the cap comes off and sprays paint in all directions. The advantage of a paint grenade is that it can be thrown over barricades. While hitting someone directly with a paint grenade might be difficult, paint grenades can force enemy players to run from cover if you get your angle right, allowing you and your teammates to ‘light ‘em up’ as soon as they are exposed!

How to make your own paint grenade?

Making your own splatter-type paint grenade is easier than you might guess. You need a small length of surgical tubing that is cut to size. Tie one end up tightly with a zip tie. Take a plastic syringe and draw in about 100ml of paint. Next, take the open end of the surgical tubing and insert your plastic syringe. The aim is to fill the tubing up with paint as you would a water balloon, but if you are not holding on carefully this is the part where you get covered in paint.

If you’ve done it right, you should be the tube by the open end and the inside should be filled with paint. This is your ‘paint grenade’. Still holding the end tightly, fold it over itself and place the folded end through a washer. Lastly, use a cotter pin to clamp the end shut. The cotter pin / washer combo should clamp the end of the surgical tube down so that the paint grenade doesn’t go off.

That’s it. When the grenade hits something, the washer will come off, spraying paint wildly over anything and anyone that happens to be nearby.

How to build a paintball field?

Now that you’ve built your own paintball gear, the only thing that’s missing is a place to play paintball. The easiest way to do this (and probably the best) is to find an isolated spot where you have the landowner's permission and there won't be any passers-by.

Simply agree on some boundaries with your friends and enjoy playing paintball. If there is even a tiny chance that passers-by might come close, you’re going to need to put netting up to prevent them from getting hit.

The other easy option is finding a rundown building or property within private land with the landowner's permission that they don't mind you using. There are a whole range of potential legal and safety problems involved in going down this route, so you’ll need to do some extensive research and planning. We recommend you play on an approved site rather than your own as the fields are already set up and you won't have to go through the hassle of making it yourself.

The hard way is building your own paintball field in your own back garden or on your own plot of private land. Not only will you most likely have to put up netting, but you may also need to dig ditches and install barricades and other features to make your paintball games as interesting as possible.

As you’ve just learned, making your own paintball marker and field is not only extremely dangerous, it’s also extremely hard. Why put yourself through all that hassle? Instead, come play paintball with us this weekend. We’ve done the hard work, so you don’t have to.