What is the best paintball gun and could it kill a zombie? 5 more essential paintball questions answered... | Paintballing Ltd
Skip to main content

What is the best paintball gun and could it kill a zombie? 5 more essential paintball questions answered...

What do zombies and giant robots have to do with paintballing? Find out the answer to this important question and more in our paintballing FAQ...

1. What is the best paintball gun?

It’s clearly ludicrous to pick just one ‘best’ paintball gun as there are so many contenders to choose from, including fearsome paintball miniguns and chaotic paintball grenade launchers. However, one paintball ‘gun’ that stands head and shoulders above the rest is clear… and its not a paintball gun that any mere human could lift...

The Megabot mark II is a 5,400-kg titanium robot equipped with a paintball cannon of equally epic proportions. The paintball cannon fires 1.3 kg paintballs at speeds of over 120 miles per hour, making short work of pretty much anything unfortunate enough to stand in the way. If you’re as excited about giant paintball robots as we are, you’ll be thrilled to hear that the megabot is scheduled to fight its Japanese counterpart in June 2016. 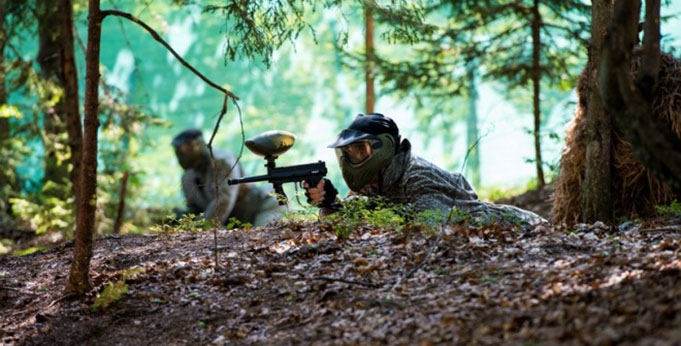 Not as much as you might think! It depends on a variety of factors, such as where you get hit, what clothes you are wearing, how close you are to the shooter and your personal tolerance for pain. Generally speaking, people are surprised to find that getting hit by a paintball doesn’t hurt as much as they thought it would, and the minor sting of getting hit is more than worth it for the excitement of taking part in the game. If you are really worried about the pain, try wearing an additional layer of clothing. This will take the sting out of the shot, but you might get a little overheated.

3. Would a paintball gun kill a zombie?

We’ve all imagined trying to survive a zombie apocalypse, but would a paintball marker be an effective weapon? Probably not... A paintball marker would almost certainly not be able to kill a zombie. Our paintball markers are designed with safety in mind and therefore cannot be used to decapitate members of the undead. However, the paintball cannon wielded by the Megabot mentioned earlier could quite possibly kill a zombie, especially if the zombie was partially rotten already. A Megabots versus zombies deathmatch is something that we would all quite happily see in the name of scientific research.

It depends on how quickly you can shoot! If you wanted to fire a hundred paintballs into a tree you could probably get rid of all of them in a couple of minutes. However, this is not something we advise doing during an actual game. How quickly you will fire 100 paintballs is really up to you. Some people like to take their time with each shot, while others like to lay down a barrage of flying paint. We find that an average player will use about 500 - 600 paintballs in an entire day, so 100 paintballs is usually enough for a couple of games. The important things are that a) you don’t run out of paintballs mid firefight and b) you are having fun. You could go all day without firing a single shot if you really wanted to, but it wouldn’t be much fun!

5. What happens if paintballs get wet?

Trust in God and keep your powder and paintballs dry. So said Oliver Cromwell before he invaded Ireland. Possibly. In all seriousness, water and paintballs do not mix. This is because paintballs can absorb water and then warp or swell, meaning that they will no longer fit in your marker and could even cause it to jam. Keep your paintballs dry in a waterproof container, and don’t be tempted to load up on paintballs that have been left exposed to the elements. Paintball markers themselves are usually okay if they get a little wet, but you’ll want to dry them off after they get wet so that they don’t rust. Electronic paintball markers do not like water at all and their circuitry could be damaged by water.

We answer more questions from our readers every week so leave a comment if there’s anything more that you’d like to learn about paintball.

How much does paintballing cost, is paintballing dangerous and other essential paintball questions answered
How to make a paintball gun at home (and why you should never do this)
How to be good at paintball (even if you’ve never played before)
7 weird paintball games that should totally be a thing!
When was paintball first invented?